They Call me Mellow Yellow

It's official.  Honey, Eyore, and myself have completed more than 50% of our 48-state extravaganza.

After five wonderfully warm days spent in Moab, enjoying the company of my co-camper, Bill, and
our fantastic campground host, Andy, it was time to breach the halfway mark.  A quick detour into Idaho once again set me on my path to Wyoming.

﻿ Yellowstone National Park, our country's first national park, creeps into Idaho and Montana, thus offering me just enough confusion to question whether Wyoming or Montana became our 24th state.  Dropping in from the west entrance, I scanned for large animals lurking on the roadside in what I thought was Wyoming - until a road sign welcomed me to Montana - only to be followed by my GPS claiming I had just entered Wyoming.  'Twas a confusing moment, but a moment nonetheless. 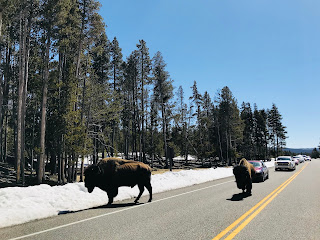 Anyhow, my first day spent in Yellowstone was a far cry from disappointment.  Snow capped mountains.  Glistening rivers.  Steaming geysers.  Turquoise hot springs.  My amazement of the landscape was only matched by the lack thereof from the land's natives.  Namely, the bison and elk.  At my first of countless road blocks due to  bison crossing, I obviously rolled down my window for a clear shot of these 2000 lb hairy beasts.  Mistake number one.  As Eyore locked eyes with Bison #1 (we'll call him Hank), Bison #2 (Jeff) got a good old sniff and headed directly for Honey.  Eyore all but lost his shit.  I immediately dropped my phone, yanked the pup to the ground with one hand as I earnestly rolled up my window with the other.  With less than a foot between us and  Jeff, I gently eased down the pedal in an effort to avoid witnessing bison horns impale Honey's driver-side door.

We are the interlopers in this lush vast landscape.  Remember that.  Once I accepted the animals' 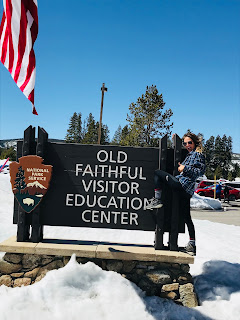 ubiquitous presence, I soon noticed the gifts they left behind.  Do you remember when you used to pile into your mom's sedan with three of your closest friends on a drive to Friendly's?  You anxiously awaited the drop off while dreaming of the toppings and flavors of that creamy ice that awaited you.  Yet every so often this delicious trip was made grander when you and your friends decided to conquer the 12-scoop sundae.  When the dessert arrived, you all grabbed your slightly scratched silver spoons and dug into the pile that lay before you.  Well, picture an all chocolate 12-scoop deluxe version of this scenario and then imagine viewing such a sundae every five feet.  On the ground.  Hardened.  Are you picturing it?  Let's just say, I wasn't running for my silver spoon.  I was carefully watching my step though.

That night, I enjoyed a campfire under the stars among good company for the perfect ending to a beautiful day.  The following day, Eyore and I were met with a herd of Elk casually enjoying some breakfast within our campground.  Perhaps this time Eyore realized that he was far smaller than what appears to be a deer on steroids and decided against causing a scene.﻿﻿﻿﻿
﻿﻿ Despite the breathtaking views, a winter storm (in late April - sick joke) caused us to be on our way after two nights in the oldest park.  In less than five minutes, we were in Montana.  State #25 baby!  After 200 miles without ever losing site of the white mountain tops, sprawling farmland, and crystal blue skies, I can safely say I think I'm going to like it here. 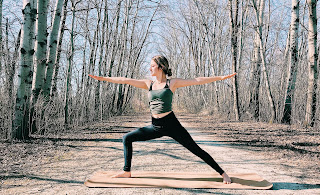 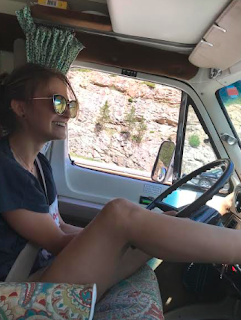 Megan Forziati
Hello, Beautiful Human! My name is Megan and the the van is Honey. Now that you have the essential information, you're ready to tackle my blog! When we aren't moseying down a country road or swatting away giant mosquitos, I'm probably teaching yoga or singing the wrong lyrics to a 70s song. I hope to meet you on the road!

Save the Outdoors we Love so Much